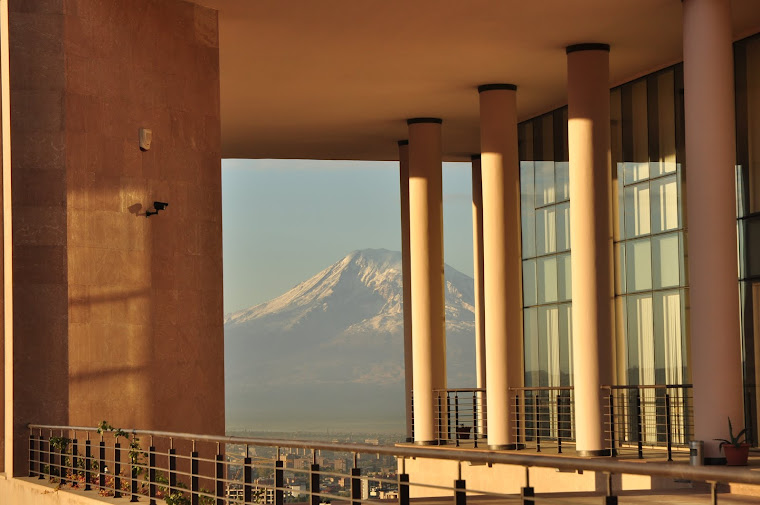 The Two Sides of the Velvet Curtain 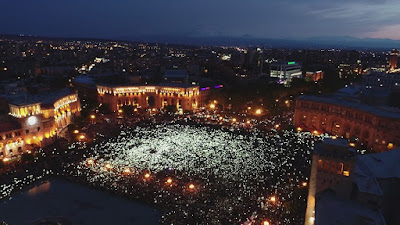 Students of modern European history will be familiar with the Dreyfus Affair (1894-1906). A French army captain, Alfred Dreyfus, was falsely accused of treason for passing military secrets to Germany. The case dragged on for 12 years, and divided French society into two: the “dreyfusards", who presented themselves as defenders of justice and the truth, and the “anti-dreyfusards”, who believed that the pursuit of truth and justice should be subordinated to the superior interests of the State, and who often wrapped their rhetoric in anti-Semitic (Dreyfus happened to be Jewish) and nationalistic language. What’s interesting is that these camps crossed traditional class and other divisions in society. In addition to creating serious rifts within the Army and other state institutions, the difference of opinions split apart friendships and families (the “affair” was not allowed to be brought up during family dinners to avoid fights). The affair finally ended in 1906 when the Court of Cassation overturned the guilty verdicts and re-instated Dreyfus to his position in the Army.

For the past few months, it seems as if the “pro-Nikol” and “anti-Nikol” camps in Armenia are similarly crossing traditional lines between the haves and have-nots, Republicans and previously opposition party members, pro-Russians and pro-West groups – it’s difficult to find traditional common ground between these divided groups. But common ground we need to find – the stakes are too high to either blindly follow, or incessantly criticize, Nikol Pashinyan and his young government.

The “Nikolards”
Anyone who has ridden in a Yerevan taxi since May knows that the mood on the street has changed – taxi drivers, frontline broadcasters of the pessimistic, “Երկիրը երկիր չէ” (the country is not a country) mantra, are now happily extoling the New Armenia and the slow unraveling of 25 years of patrimonial, semi-feudal lording by the authoritarian governments and their oligarchic supporters. The young protesters, whose brave, resolute and peaceful take-over first of the streets, then Republic Square, and ultimately the government, are now reveling in the frequent Facebook live sessions by “their” Prime Minister, and applaud each new “finding” by the National Security Service (NSS) of corruption/avarice by the former feudal lords. They also love to repeat the average age of ministers in his government (it’s 41*). Diasporans, whether repatriated or visiting, are riding a wave of hope for the Armenia they had always dreamed to see. Դուխով is the new Երկիրը երկիր չէ.

The “anti-Nikolards”
On the other side are very unlikely allies – a widely-diverse group of former Republican Party apparatchiks, Russophiles (who believe that any antagonism toward Russia will result in an immediate shift of balance of power in the region (and especially in the Artsakh conflict), traditionalists (who believe that important Armenian national institutions such as the Church must be protected at all costs) and, most surprisingly, many highly-educated, patriotic, non-corrupt/non-oligarchic professionals from different fields. The latter segment focuses on three main points of criticism:

1)   This government is too young and inexperienced to adequately handle affairs of state, especially when it comes to security/defense, economic growth and diplomacy

2)   The zeal and intensity with which the government (and especially the NSS) is chasing former supporters/members of the previous regime is de-stabilizing the country, and turning their focus away from doing their real job, which is to prevent asymmetric actions by our enemies

3)   This government is penetrated (or secretly led) by Sorosites (Սորոսականներ)–former employees of various organizations funded by George Soros and his Open Society Foundation, whose aim is to break down state and national institutions in favor of a cross-national idea of individualism. This group focuses on George Soros’s embracement of the ideas of Karl Popper, an Austrian philosopher who championed the notion of an Open Society, in which individual liberty, pluralism and free inquiry prevailed, and argues that Soros and OSI are directly targeting those institutions which preserve Armenian identity (church, language, army, state). I’ll leave it to each reader to draw their own conclusion about this hypothesis.

The latest group to join the “anti-Nikolards” are the staunch defenders of Robert Kocharyan, the second President of the modern Republic of Armenia. In the last few weeks, Mr. Kocharyan has been arrested, jailed and then released on bail on charges that in March 2008, during the last days of his tenure as President, he violated the constitutional order by directing authorities to fire on protesters, killing 8 civilians and two policemen. This group eschews the term “Sorosites” for the broader term “zombies”, supposedly people who blindly follow Nikol and create fake social media accounts to attack anyone who is critical of the new Prime Minister. Of course, they conveniently forget the reign of political violence and significant curtailing of opposition media during the Kocharyan years, not to mention the wide-scale corruption and concentration of wealth during the Sargsyan era.

The trap of expecting too much and doing too little
The two short paragraphs above cannot possibly describe the wide spectrum of people, groups and ideologies lining up on either side of the “Nikol Affair.” Many supporters are looking for wide-scale and immediate elimination of all inequities overnight – social (gender, LGBT), economic, environmental, religious and the like. On the other side, many detractors would like to replace one set of oligarchic and corrupt officials with their own (which would defeat the whole purpose of the Velvet Revolution). Expectations are high, and ability to please all sides understandably low.

So what is the answer?

First, we need to agree that what Nikol and his followers achieved was nothing short of a modern miracle. Just as no one expected the fall of the Berlin Wall and the subsequent dissolution of the Iron Curtain and the Soviet Union to happen so suddenly, no one expected a movement which started with 15 people hiking with backpacks, baseball caps and water bottles to end up legitimately taking over Baghramyan 26 (the seat of the leader of the country). In less than three weeks, a structure and form of governing born during 70 years of Soviet rule, which then mutated to adapt to a post-independence Armenia, was over-turned, without bloodshed. This was a historic Velvet Revolution, and put tiny Armenia on the map of progressive nations and societies.

Next, we all need to understand that failure to capitalize on this revolution is not an option – we cannot afford to go back to the autocratic-oligarchic structure; we cannot afford to lose the enthusiasm, energy and Դուխ of the tens of thousands whose peaceful and canny street protests led to the unraveling of the previous structure; and most importantly, we cannot lose the achievements gained over the past 25 years: winning the original Artsakh war, building the institutions of an independent republic, and re-creating the notion of a national homeland for all Armenians.

As a result, both the “Nikolards” and “anti-Nikolards” must understand that the conflict is not between them, or between Sorosites and Russophiles, or between young and old. It’s between Armenia and its enemies, between a modern and progressive forward-looking country and society, and a return to an outdated system whose capacity and sole focus of feeding itself would lead to the inevitable demise of the country.

For the new Prime Minister and his government, the focus should be on driving, as fast as possible, toward truly free and fair elections. They should capitalize on the thousands of Armenians who want a better Armenia to staff election-day party proxy and election monitor positions. They should initiate a very broad and visible campaign on voter education, teaching ordinary citizens that their vote DOES matter, and that selling a vote is akin to selling their future. They should end the round of vendettas against former officials/oligarchs, not because these are not deserved, but because the time isn’t now – right now, there should be singular focus on elections and protecting the key pillars of the state (security/defense, active diplomacy, maintaining economic output and tax revenue). This also means that Nikolards should delay (but not drop) their demands for solving every problem on their ever-lengthening list – there will be plenty of time to attack these once there is a legitimate majority in parliament following the elections.

On the other side of the issue, the anti-Nikolards must understand that the gains of the Velvet Revolution simply cannot be lost because of short-sighted political gains or ill-informed ideological or cultural grand-standing. Can anyone imagine going back to the days of the Kocharyan government, when opposition politicians and journalists were routinely threatened, beaten-up or put in jail? When we so often speak of the Diaspora as a potentially game-changing source of talent, financing and networking resource for Armenia, do we really want to give them yet another reason to dismiss Armenia as a failed state? Finally, do you really want our beloved taxi drivers to go back to their gloomy, Երկիրը երկիր չէ sermons?

Let’s hope reason and a sense of nation will prevail over pure emotion and political machinations, and that the Velvet curtain currently dividing our society will be raised to reveal a united Armenia. 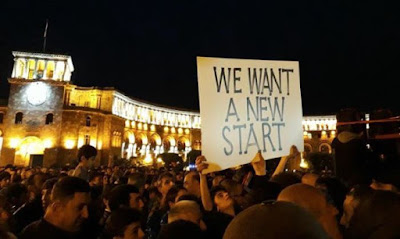 *Thanks to Sati Kassarjian for taking the time to do primary research on this :-)
Posted by RaffiMK at 00:06 No comments: